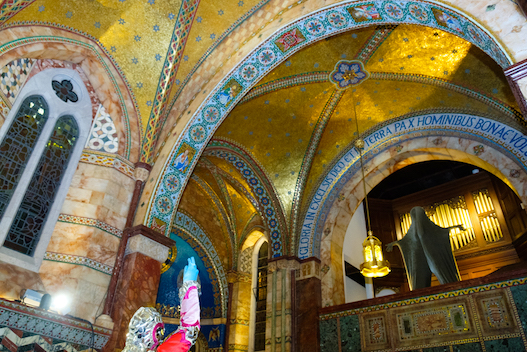 A student-led panel organised by Central St Martin’s students to reflect on Leigh Bowery’s legacy and to consider his continued influence on queer culture. Please note that all the in-person tickets for this event are now sold out but you can join us free on zoom by registering on Eventbrite.

Tickets are on Eventbrite

You will be required to show proof of double vaccination against COVID-19 or a recent negative COVID-19 test to gain entry. Please test on the day if possible.

Please wear a mask inside the chapel at all times, unless exempt.

This event is wheelchair accessible. If you have access needs, please let us know.

This event will be held at the Fitzrovia Chapel, with limited capacity, and will be charged at £5 + booking fee. You can also join this event on zoom, free of charge. Please select a ‘free’ ticket and you will receive a zoom link via email beforehand.

BISHI is a singer, electronic rock-sitarist, composer and producer, born in London to Bengali heritage. Bishi has written, performed and released two albums and five EPs on her own label Gryphon Records. She is the founder of WITCIH: The Women in Technology Creative Industries Hub, a platform elevating Womxn in Tech. A passionate advocate for inclusivity in the music industry and gender equality in tech, she is a broadcaster on BBC Radio 4, and is currently an ambassador for the Featured Artists Coalition.

Max Allen is a freelance fashion designer and collaborates with fashion collective Fantastic Toiles. Sometimes Allen describes himself as a post-drag pop artist. Originally from Chesterfield in Derbyshire, Max moved to London to study fashion at Central Saint Martins. He has worked at various clubs in London such as East Bloc, The George & Dragon, The Glory, The Pale Blue Door and collaborated with the designer Lyall Hakaraia at VFD (Vogue Fabrics Dalston).

Jeanie is an artist and performer and has collaborated with various art and fashion collectives and club nights such as Pattern Party, Birds Art Collective, Faboo, and Harpies Strip Club. Jeannie’s work is informed by self-deification and joy working with teams of artists and giving agency and power to queer performers and sex workers.

Born in Rufford, Lancashire Charity Kase explored make-up and fashion from an early age and working in London’s club The Box from 2018. Charity went on to compete on the third series of RuPaul’s Drag Race UK. In 2021, she has been described as one of London’s edgiest drag queens. During her time on Drag Race UK, Charity Kase became the third contestant in Drag Race history, and the first from Drag Race UK, to reveal she was living with HIV.